A Mockingbird trills ree-ree-ree-swoo, ree-ree-ree-swoo, over and over again. Bright yellow mustard flowers flank the weedy plot of dirt where, seven years ago, a ravenous gopher ate through the middle of three out of four newly planted Buddleia—Butterfly bushes. Weeds abound. Unlike marriage, their success relies— 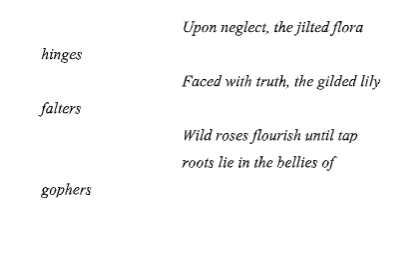 Weedy mental meandering is what I do when endings and beginnings are wedged-up like incompatible vegetables planted too close together; cabbage and strawberries, for example; or tomatoes next to bush beans. But while avoiding vegetable catastrophes only requires a bit of research, avoiding personal catastrophes is less clear-cut, by far. One only has to look to Shakespeare for proof.

In junior high, I accidentally played Juliet. Ms. Anderson, the drama teacher, saw something in me and claimed I’d be perfect for the role. Me? I thought, five seconds before my ego primed my lips with a commitment. Each night, under cover of darkness, I’d earnestly rehearse my lines in the back garden:

Deny thy father and refuse thy name/Or, if thou wilt not, be but
sworn my love/And I’ll no longer be a Capulet.

Weeks later I’d plunge Romeo’s dagger through two layers of chiffon, fake blood exploding across my abdomen, and collapse dead on the stage.

What wasn’t clear to the eighth-grade me, anything related to my feminist renaissance to-come, is now as transparent as air. Juliet should never have offered to give up her name. After abandoning my maiden name four times, as if getting married was akin to existing in a self-induced coma, it took Donald Trump becoming America’s 45th president to wake me. In an instant, every flimsy belief I’d held became sturdy inspiration for deep internal change. Raised by strong women and nearly absent—either physically or emotionally—men, I can only scream to myself: What took you so (52 years) long? Doesn’t matter, really. A maiden name isn’t difficult to reclaim. A dead marriage is.

I read recently that in shade, Zinnias produce fewer flowers on smaller plants. Shade is a problem for them, just as it has always been for women who stand in the shadow of a man—we can’t grow properly there.

Zinnias were discovered in the 1800s, by Johann Gottfried Zinn, a German botanist, and have become a symbol of endurance. I’m envisioning the Zinnia’s floral antecedents through the eyes of budding botanist Alma, from Elizabeth Gilbert’s The Signature of All Things. I’m belly-to-the-dirt, clothing of the day notwithstanding, investigating flora and fauna, calculating exactly how our world first began to grow. I’m maintaining a detailed notebook of lichen, replete with illustrations, and envisioning what our world might, based on these micro-investigations, become. But a botanist also understands that our existence predates its discovery, that something always came first.

The feminist me predates my 2016 discovery of her. I see her as an independent five year-old pulling up patches of grass just to peer into the teeming world below. I see her in a lifelong refusal to embrace religious discrimination against the gays, and in my wonky determination to keep trying to get love right even after repeated failures.

Some people don’t like the word feminist much. It’s as misunderstood and poorly labeled as “weeds” that are just flowers that want to grow, unobstructed.